Argo Devlog: Many things are changing, many stay the same

Woah, it's been half a year since the last update! To quote the previous post: "So, for now we'll take a break. Our programmer especially has been working day and night to complete the game jam release and deserves some slack."
This of course doesn't mean that we've been doing nothing for half a year, quite the opposite. The length of our game design document has increased considerably and we've polished the gameplay by quite a bit.

But first things first: The changes. You might have noticed that the gamejam game has been renamed to "Argo Prequel". The new Argo has been drifting away from the gamejam version in terms of art style and scale. Previously the battles were the main aspect, but we're planning to add map exploration and crafting. We've made huge progress with the former and have already designed a test map where you can gather materials and battle a monster. We're now moving on to perfecting these aspects, battles and exploration that is, since they will be the biggest part of Argo's gameplay. We've also been brainstorming on the story and the premise will mostly stay the same. But we'll of course work on making it more engaging and immersive. The Argo Prequel only had the intro sequence, showing you how Argo became a demon, but we want to add on to it and show Argo's progress as he struggles to save his sister and the characters he meets along the way (more on the latter in the next post, possibly).
We've also decided to move away from the mono-chromatic art style since that'll allow us to make the story and exploration segments way more expressive. The art of this new version has been made by Unfuneral, an amazing pixel artist. Make sure to check them out!
If you'd like to see some gameplay then make sure to check out our recent update video, that we made for a German game dev showcase! The audio is in German, but you can see some of the early gameplay in the second half of the video:
https://www.youtube.com/watch?v=cqyJU_OymIQ 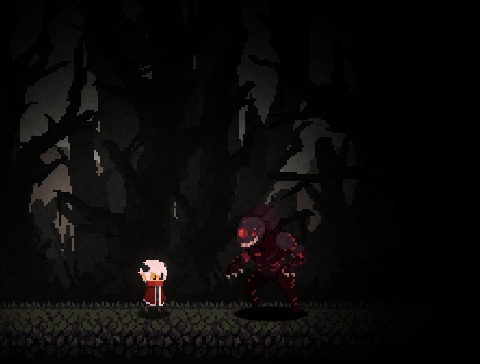 Second things second: The non-changes (I couldn't find a good antonym for changes). Aside from leaving the story premise the same, a big portion of the code from the "Argo Prequel" was brought over to the new Argo. The battles will still have an arrow input system, we're still planning to keep them fast paced and most of the enemies and skills have been adapted to the new Argo, meaning that the core features from the Argo Prequel will of course stay.

And that's that! Make sure to follow our Twitter if you'd like to stay up to date on the progress! We've already shared quite a few pictures featuring the new art style on there and can't wait to hear what you think about!
https://twitter.com/RocRacGames