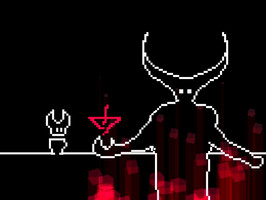 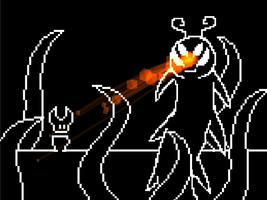 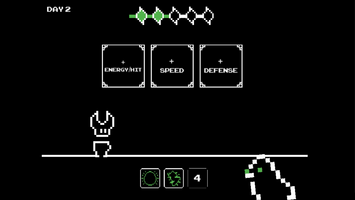 This is our first devlog post and we'd like to take this opportunity to introduce you to one of our games: Argo!
We participated in the gamejam "gppcc17" with this game, which is a German game jam,.

Gameplay
Argo is a pixel-roguelite game, with currently 3 bosses and 12 enemy waves.
You can currently use 3 skills that use up energy points (aka your sanity and your life).
Every skill has its own cooldown.
You generate energy with every strike you inflict on an opponent.
But when an opponent hits you, you lose some of your energy.
Every 5th enemy wave a random boss appears (there are currently 3 different bosses). After killing a boss you are bestowed with a permanent skill unique to that boss.
After each enemy wave you have the opportunity to upgrade your character.

The idea was to create a simple black-and-white pixel game that is, in a way, similar to an auto runner. You have to time the skills accurately before being swallowed up by an enemy wave.

Future
We're planning to include an assortment of persistent upgrades after each run.
There will be many more bosses and you will be able to unlock more skills.

Community
We're looking forward to your feedback, it's really important to us, as it allows us to make the game the best it can be.
But we can only do that with your help! :)